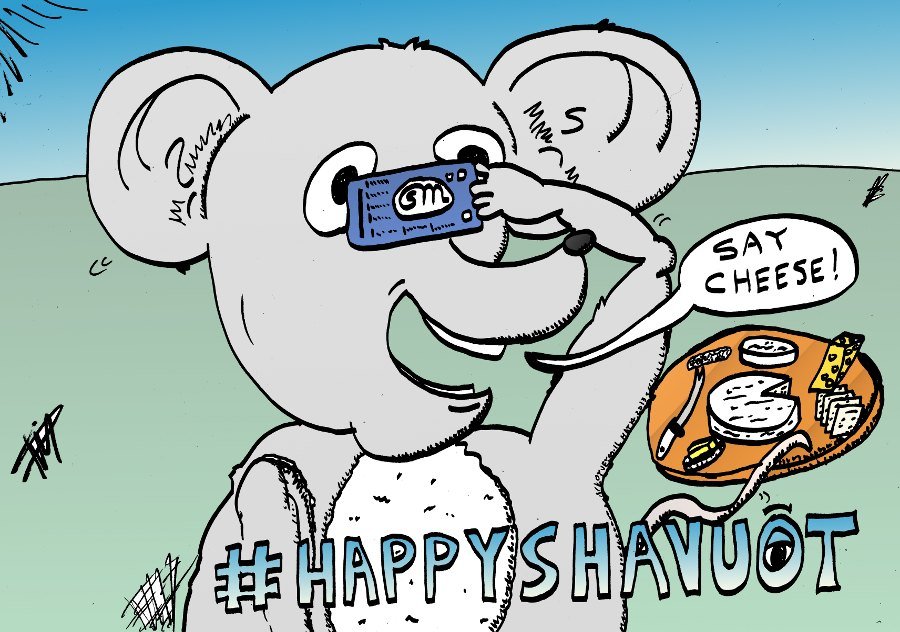 It’s Shavuot again. That time of year in the Jewish calendar (largely in Israel), where people celebrate the blessed cheesemakers, and the dairy they delivery.

Of course last year saw Oy Vey bring to light the famouse color comic strip panel “All Your Cheese Are Mine“, which was a follow-up to the now fabled “Happy Shavuot Cheese!” mouse editorial cartoon.

This comic strip panel was published by Laughzilla for the holiday cartoon of May 14, 2013 by Oy Vey – for the entertained appetite of all viewers.

In the Gregorian calendar, this webcomic illustration first appeared on what was the 65th anniversary of Israel’s Independence Day. Shavuot is mostly celebrated in Israel, partly because most of the farmers in Israel are Jewish, and therefore, the farming community’s holidays are much more important, as indeed are all of the holidays, since Israel has a broad population variety, despite its small population size.

Shavuot is a little like having a French brunch. You eat lots of cheese and drink a nice amount of wine, and you do this for a period of two days, not including the few days before and after which seem to be added on by cultural tradition and glorification of the curdled milk materials.

And if you’re looking for a good ice breaker at a cheese & wine event, here’s a little haiku you can take with you.

Shavuot is here. It’s time to eat some cheeses, and drink some good wine.