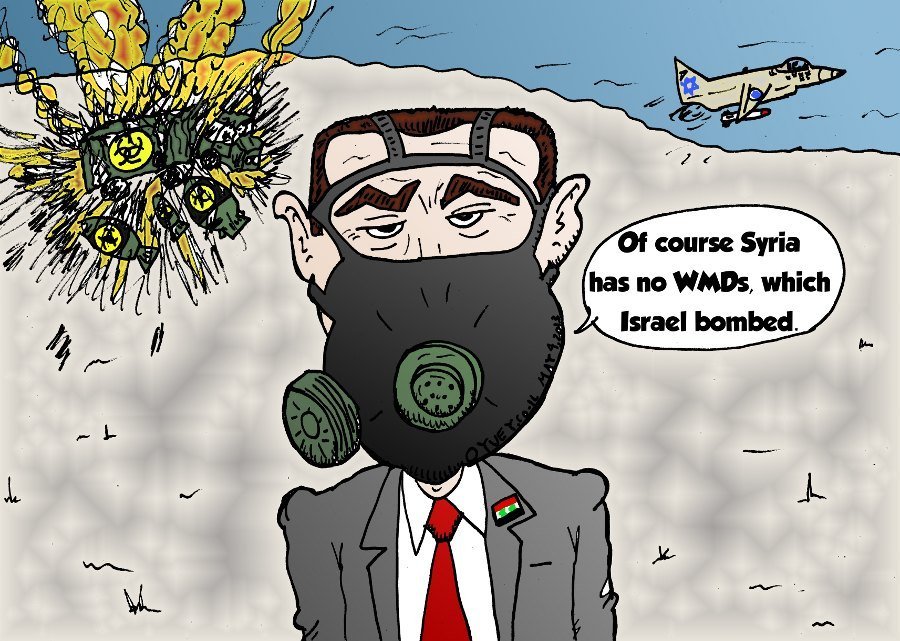 The trouble with denials

President Bashar al-Assad has long denied there being any Syrian chemical weapons arsenal of any kind, despite evidence to the contrary. That makes the irony of Israel’s latest hit on a Syrian convoy allegedly carrying chemical weapons from Syria to Hizbullah terrorists in Lebanon even funnier in a macabre sense.

This Syrian chemical weapons editorial cartoon features a caricature of Bashar Assad wearing a gas mask in the middle of an open landscape, with a bombed out truck carrying chemical weapons, and a fighter jet marked with the Israeli symbol of the six pointed star, or Magen David, flying in the skies above what is presumably the Mediterranean Sea in the background. There are also two red rays (not quite red lines) in the image, represented in the small Syrian flag lapel pin and the red neck tie, both worn by Mr. Assad.

Red lines are, of course, something of a catch phrase which were bandied about quite a bit during this period of time, as they had been uttered by U.S. President Obama in relation to the possible actions the United States might take, should it be proven that the Syrian regime had used chemical weapons or WMDs of any kind within the confines of Syria’s Civil War.

This comic strip panel was published by Laughzilla for the political cartoon of May 4, 2013 by Oy Vey – for the enjoyment of people who may see what is and what is not.

It is the first political cartoon published by Oy Vey since the Life During Wartime cartoon, which appeared in the Autumn of the previous year.